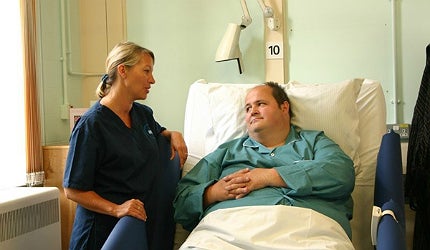 In May 2012, the UK’s first dedicated bariatric clinic opened in the grounds of BMI The Clementine Churchill Hospital in Harrow. The brainchild of leading weight loss surgery group Streamline Surgical, The Sudbury Clinic was designed entirely around the requirements of bariatric patients and aims to set a new standard for obesity treatment in the UK.

The next step in an evolving problem: opening dedicated weight loss clinics

"The launch of The Sudbury Clinic is a clear testament to the growing emphasis on bariatric surgery in the UK, and Slater believes this will only be the beginning for specialist clinics."

For co-founder and consultant bariatric surgeon Guy Slater, there were several drivers behind the opening of a completely dedicated weight loss clinic. "One is a physical issue; bariatric patients are much more comfortable with equipment suited to their size," he said. "But more importantly there is a psychological issue; bariatric patients can be seen at The Sudbury Clinic without being a source of fascination for more average-sized people."

Moreover, weight loss surgery results are best in centres staffed by experienced practitioners. "We’re a group of surgeons very experienced in the surgery," Slater noted. "We all have high volume NHS practices; personally I’ve done [more than] 1,000 of these procedures."

With almost a quarter of adults in Britain thought to be obese and statistics suggesting that half of children may be overweight by 2020, the clinic couldn’t have opened at a more opportune moment. But why has obesity become such a huge problem in the UK?

"Food is just too plentiful and too easily obtained," Slater believes. "Carbohydrate and high calorie foods have become very cheap, while fruit and vegetables remain quite expensive."

According to Simon Dexter, consultant bariatric surgeon at Spire Leeds Hospital and treasurer of the British Obesity and Metabolic Surgery Society (BOMSS), it all goes back to the theory of evolution. "We’re designed to store energy in times of plenty so that in times of scarcity we can use it up; unfortunately the times of scarcity never arrive," he explained. "It’s inevitable that obesity is increasing in Western populations."

To stop obesity becoming an even larger problem than it already is, therefore, prevention is absolutely key. "We don’t want people to become obese, and as a society we have to look at how we live and how we work to prevent people becoming overweight," Slater remarked.

Dexter agreed: "Childhood obesity is a real wake-up call," he emphasised. "I’d personally like to see a real emphasis on kids and families gaining understanding; simple measures need to be taken to highlight where the problems are."

Yet, there is a small sector of society that has progressed beyond the point of dieting and exercise programmes; for these people, weight loss surgery is the only option. "The problem is that once you become morbidly obese (i.e. with a BMI of more than 40), there is no evidence that dieting or exercise programmes work," Slater confirmed. "The only thing that works is surgery."

Obesity: a hefty burden on the NHS and society

The benefits of bariatric surgery are far more wide-ranging than helping a small percentage of the population shed a few pounds.

"To stop obesity becoming an even larger problem than it already is, therefore, prevention is absolutely key."

A patient who is morbidly obese not only has a much lower life expectancy than their average-sized counterpart because of their size; they are also at much higher risk of co-morbidities such as diabetes, which place a huge burden on both the NHS and society. "The cost of treating diabetes is increasing all the time, and when you get into the lost incomes, disability benefits and so on, it makes the societal burden even greater than the NHS cost," Dexter explained.

This makes the financial argument for weight loss surgery extremely pertinent. "If you were to give a laparoscopic roux-en-y gastric bypass to a diabetic patient, it would cost the NHS roughly £9,000 to do that operation," Slater remarked. "But that cost would be recouped within two years."

Surgery can result in the reversal or prevention of co-morbidities; indeed, for a high proportion of bypass patients, diabetes goes into remission immediately following surgery. "You can also prevent the onset of diabetes in many other patients who would otherwise develop it," Dexter added. "There are even suggestions that conditions like depression can be reduced.

"The consequence of all that is that it gets people up and out, working, and hopefully contributing to society and paying taxes."

Universal access to obesity treatment: a long way off

Despite the obvious benefits of weight loss surgery, however, the UK is still a long way from offering universal access to the treatment. While dedicated clinics like The Sudbury Clinic offer an excellent standard of care, this kind of service is simply not accessible to enough of the morbidly obese population. "It’s probably one of the most extreme examples of the postcode lottery," Slater acknowledged.

Dexter is fully in agreement: "The problem is that surgery is being rationed by PCTs," he said. While the National Institute for Health and Clinical Excellence (NICE) has issued guidelines stating that a patient is eligible for surgery if their BMI is more than 40 (or in excess of 35 with illnesses related to obesity), different PCTs implement NICE’s guidance in different ways.

"Commissioning bodies in many places have altered those guidelines to effectively ration the amount of surgery being made available, which limits the number of operations they do dramatically.

"On the other hand, it also gives the perverse incentive for people to try and put on weight in order to become eligible for surgery."

Yet the situation is improving, albeit slowly. Indeed, the Healthy Survey for England figures for 2010/11 showed a 30-fold increase in bariatric surgery since 2000, with 2010’s 8,087 operations dwarfing the 261 that were headline news 12 years ago. "There’s an acceptance and appreciation that it is worthwhile," Dexter believes. "But it is a big financial outlay."

It will also take time to train a sufficient number of surgeons to offer this kind of treatment, but, again, the UK is certainly on the right track. "Ten years ago, there were only a handful of people able to offer this surgery," Dexter noted. "But now about three quarters of those people training in upper gastric surgery want to do bariatric surgery. There are an increasing number of people coming through who appreciate that it’s the future for them and want to contribute."

The launch of The Sudbury Clinic is a clear testament to the growing emphasis on bariatric surgery in the UK, and Slater believes this will only be the beginning for specialist clinics. For Dexter, however, the future should be more focused on creating dedicated bariatric services within hospitals. "It’s a universal problem so we need to have universal access," he concluded. "I think that’s gradually changing but we’re still going through a period of development. That will progress over time."