Post-traumatic stress disorder (PTSD) is an anxiety disorder that affects approximately 25% of people after experiencing a distressing life event, such as a violent personal assault, a terrorist attack, a negative experience in childhood, or a serious illness.

The diagnostic criteria for PTSD has been set in the American Psychiatric Association’s Diagnostic and Statistical Manual of Mental Disorders, Fifth Edition (DSM-5). People who repeatedly experience traumatic situations, such as those suffering from domestic abuse, are often diagnosed with complex PTSD. Many risk factors have been suggested to influence PTSD, with sex in particular proving to have a large effect.

Symptoms for PTSD can start immediately after a traumatic event, or can take months to appear. Symptoms vary between individuals, but can include negative thoughts and feelings, re-experiencing the traumatic event through flashbacks or nightmares, avoidance of or emotional numbing toward reminders of the event, and hyper-arousal often leading to angry outbursts. Treatments for this disorder include cognitive behavioral therapy (CBT) and anti-depressant medication, which have proven successful even years after the initial trauma.

When exploring sex as a risk factor for PTSD, women are shown to be at much greater risk of developing this disorder than men. 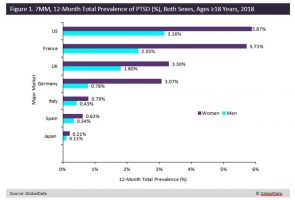 This increased total prevalence rate of PTSD in women is thought to be due to a number of factors, including the type trauma experienced, biological differences, and perceptions of the traumatic event. It is also possible that men are less likely to admit to experiencing symptoms of PTSD, resulting in the number of cases of men with PTSD being underestimated.

With this clear disparity in the total prevalence of PTSD across sexes, it would seem appropriate to use sex in determining whether or not an individual has PTSD.