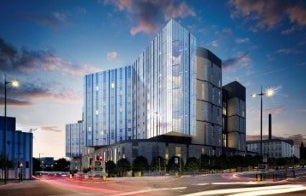 The new hospital will be equipped with 646 beds, including a 40-bed critical care unit, 18 theatres and the one of largest emergency departments in the north-west region.

Commenting on the new hospital, Kehoe said: "It will provide both the most advanced treatment and the highest standards of comfort, privacy and dignity for patients."

The current hospital will be demolished once the new project is completed.

Carillion will provide support services for the new hospital, from which it expects to generate £80m of revenue over the life of the 30-year concession contract.

In addition, Carillion plans to invest £24m of equity in the project.

Carillion project director Austin Bell said the new Royal will provide 750 full time construction jobs, 60% of which will be for local people and 15% from priority wards in the city.

"There will be 100 apprenticeships, along with opportunities for homeless people and 16 to 24 year olds who are experiencing barriers to learning and employment. In addition, 60% of the construction spend of the project will go to the local area, supporting local businesses," Bell added.

The new hospital will also help to generate 5,000 high value jobs, many of which will be provided by the city’s University Technical College.

The hospital will be developed as a green project with renewable energy systems, low carbon technology, water meters and leak detection systems.

Brexit and Healthcare Industry - Implications for Pharma - The Story So Far

View All
View All

Who’s innovating where? Patent activity related to cybersecurity decreased by 8% in the healthcare industry in Q3 2022

Who’s innovating where? Patent activity related to artificial intelligence decreased by 27% in the healthcare industry in Q3 2022

Who’s hiring who? Hiring activity related to social responsibility increased by 18% in the healthcare industry in Q3 2022

Who’s hiring who? Hiring activity related to robotics increased by 10% in the healthcare industry in Q3 2022