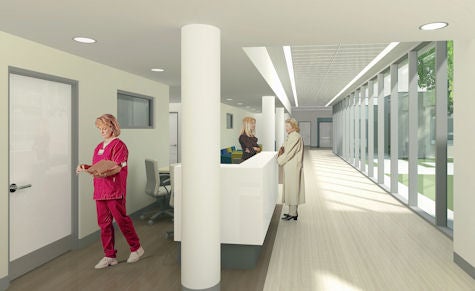 Colchester Borough Council has given the project planning permission, enabling work to begin at the end of August 2012.

The centre is the single biggest capital investment in the borough’s health service since Colchester General Hospital was built in the mid-1980s.

Located between the main building and Gainsborough Wing, the centre will consist of five bunkers and will replace the hospital’s existing radiotherapy centre.

Three new linacs will be installed initally, and the remaining two bunkers will be filled as demand for radiotherapy increases.

The radiotherapy centre will also have orthovoltage and brachytherapy units, as well as a CT scanner.

Colchester Hospital University NHS Foundation Trust chief executive Dr Gordon Coutts said the plans were good news for the trust and adults in north east and mid-Essex, who rely on the hospital for radiotherapy services.

"The radiotherapy department at Essex County Hospital continues to provide an outstanding service but it has long been this organisation’s plan to centralise cancer services on the site of Colchester General Hospital," Coutts said.

"We will be able to put in the most up-to-date machines and provide a quality service in a first-class environment for patients and carers."

The radiotherapy centre is scheduled for completion before the end of 2013 and is expected begin treating patients in early 2014.

The Trust also owns Essex County Hospital in Colchester, which was opened in 1820.