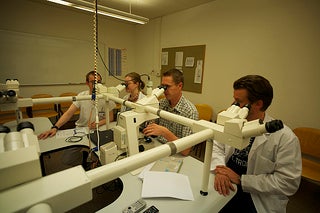 The tool, which houses the new IBM-developed microfluidic probe technology, could assist in the study of the distribution of low numbers of cancer cells in biopsied samples.

It will allow pathologists to test the presence or absence of tumour cells as well as provide doctors with useful information during the course of treatment.

This research collaboration will focus on lung cancer, which has a high mortality rate and is one of the most prevalent forms of cancer.

IBM will install the prototype device at the University Hospital in Zurich by early 2014.

"We hope to introduce new technologies, such as the microfluidic probe, into the clinical molecular pathology diagnostic framework to enable a range of investigations, which were previously thought to be infeasible," Dr Soltermann added.

The microfludic probe injects very small volumes of reagents on the tissue surface and then continuously aspirates the reagents to prevent spreading and accumulation.

This approach is used to deliver and retrieve reagents locally in selected areas of a tissue section with pinpoint accuracy that helps in mapping the heterogeneity in the tissue.

The microfluidic probe developed by IBM is expected to help determine molecular variations within tumours by interacting with tissue sections at the micrometer scale.

University Hospital Zurich Institute of Surgical Pathology tissue biobank director Dr Peter Schraml said: "In addition to assisting in diagnostics, this tool may provide insight into the biomarker distribution in tumour tissues, which can aid in understanding cancer progression."

IBM Research designs and manufactures the microfluidic probes at the Binnig and Rohrer Nanotechnology Center located in Zurich campus. This research collaboration is funded by SystemsX.ch.

IBM hopes to collaborate with a medical device maker in future for licensing the technology and marketing the tool, which is expected to greatly help pathologists in making accurate diagnosis and better detect predictive tumour markers.

The University Hospital Zurich is an 850-bed hospital that serves approximately 170,000 patients annually.