A defect of contrast medium in the liver tumour can be clearly seen by CT-like imaging.
The BRANSIST Safire VC17 angiography system.
Table 1: Performance comparison of CT and CT-like imaging.
Figure 1: Flow of data processing. 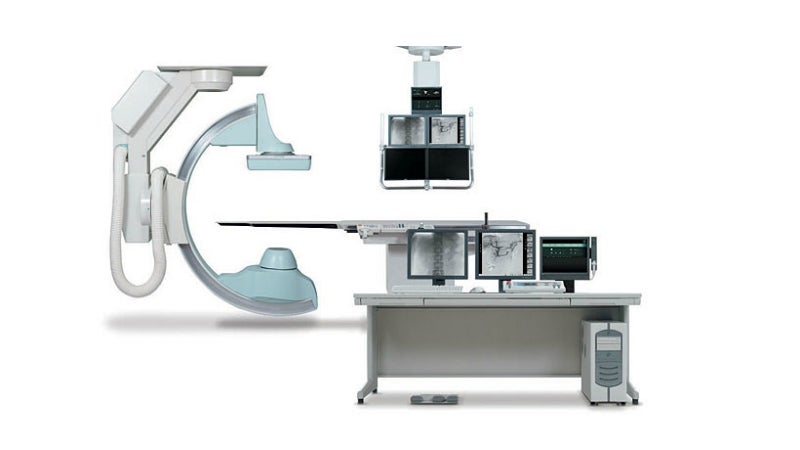 CT-like imaging using an angiographic C-arm system is a new technology. Offering low exposure and high spatial resolution, it is expected to be used in an increasingly wide range of applications.

Much attention is being given to computed tomography (CT)-like imaging, a technique whereby cross-sectional images like those obtained with CT are constructed from rotational images gained from a C-arm angiography system with a flat panel detector (FPD).

The main aim of CT-like imaging is to help increase the safety of examinations and treatments, and improve therapeutic efficacy, by allowing 3D information to be acquired during IVR treatment without moving the patient. 3D-angiography is another technique that allows 3D information to be reconstructed from rotational images obtained with a C-arm. It is mainly used, however, to visualise blood vessels illuminated with contrast medium, whereas CT-like imaging offers much greater low-contrast resolution, making it possible to visualise tumour stains.

Because of this characteristic, CT-like imaging is mainly used for the following two applications:

Patients used to be moved to the CT room during IVR treatment for the above reasons. With CT-like imaging, the risk of this movement is avoided and information can be acquired quickly. An IVR-CT system has the same functions, but both in terms of cost and operation, CT-like imaging attains superior effectiveness.

CT-like imaging is by no means superior to CT. Table 1 shows a comparison of the basic performance of the two modalities. CT-like imaging is, in fact, inferior to CT in terms of low-contrast resolution. This is because it is based on the use of an angiography system, and consequently the data bit length and the number of exposures are limited. Also, with CT, the scattered radiation that enters the sensor is reduced to around 1% by a grid, whereas with an angiography system the basic mechanical structure makes this kind of reduction impossible, and roughly half of the X-rays that enter the FPD consist of scattered radiation component. Although this scattered radiation component can be corrected to some extent with image processing, it cannot be removed accurately, and this results in inaccuracy of the CT values of reconstructed images.

At present, CT-like imaging does not produce absolute CT values, but rather visualises the relative differences in the X-ray absorption coefficients of different objects. As the name implies, it is a technique that produces images that are comparable to, but not the same as, those produced with CT.

Figure 1 shows the flow of the imaging data processing performed by this system. Broadly speaking, the rotational images obtained are converted to CT-like images in three stages. In the first stage, the pixel values of the rotational images are converted to X-ray absorption coefficients. The pixel values are first subjected to gain correction, and then after the scattered radiation component is removed by scattered radiation correction processing, beam hardening correction is applied to complete the conversion to X-ray absorption coefficients. In the next stage, the following corrections are performed:

After the above corrections are performed, the data is converted to 3D information via reconstruction processing. The reconstruction algorithm is based on the filtered back projection (FBP) method.

Shimadzu has developed a CT-like imaging function (including a 3D-angiography function) as an optional workstation for the BRANSIST Safire VC17 angiography system. After C-arm rotation, reconstructed images can be displayed in as little as 90s. A CT viewer is used for image observation, and in addition to the 2D display of axial images, multiplanar reformation (MPR), CPR (curved MPR), minimally invasive procedure (MIP), volume rendering (VR), and virtual endoscopy (VE) are supported. Various types of masking, the creation of cine images, and distance measurement are also available.

CT-like imaging performed by an angiographic C-arm system is a new technology. It offers low exposure and high spatial resolution, and can be used in an increasingly wide range of applications. In the future, Shimadzu plans to improve the processing time, low-contrast resolution, and accuracy of CT values.

(Special thanks to the University of Occupational and Environmental Health (Japan) for providing clinical images used in this article.)

Shimadzu offers solutions for medical technology. It has a broad range of products, software and customer services, plus a wide network of sales offices and distributors in almost every country in Europe. 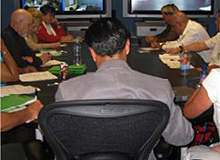 Polycom and Project ECHO: Saving Lives Throughout New Mexico
Topics in this article: